I was sitting in the car, parked behind the scoreboard when a small group of Middle School boys passed me by:

One of the young men separated himself from the others and stood in front of our car; crossing his arms in front of his chest he said to me: “A Corvette! I LOVE CORVETTES!”

Then they were off.

A few minutes later the group returned and I thought: Why not make their day and mine.  So I got out of the car, asked one of the young men if he was the one who made the comment that he LOVES corvettes.  He replied no. And I explained to him I was going to ask that young person if he would like to have a sit in the car.

“WOW!  I’ll go get him!” He was off.  Running a high speed to the grandstands, in seconds (YES SECONDS) he was back with his Corvette-loving friend.

I asked my question again, receiving an emphatic nod of the head and a dash to the rider’s side of the car.

The young man stopped for just a second and wildly ran around the back of the car to get in the door I had open.

His smile said it all. 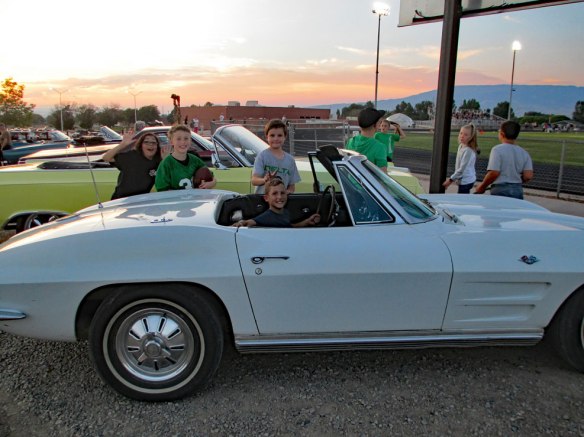 Then more friends showed up

The atmosphere of excitement was HUGE! 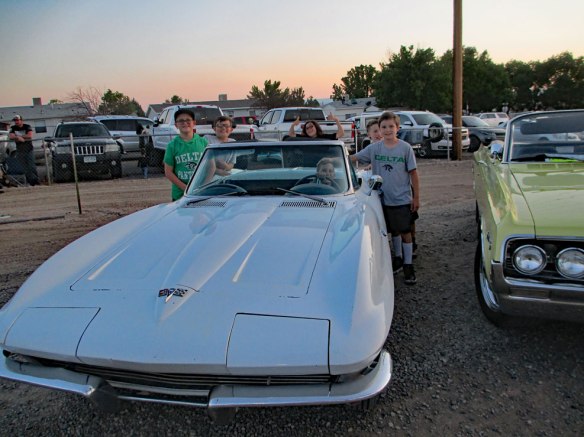 Their joy filled my, heart!

More friends showed up; the Jeepster owners gave permission for a young man and his friend to sit in their classic car.

The young man explained while he asked for permission, that his grandpa had found a Jeepster not long ago and was starting to restore it.  If he could just sit in this one he would know what it was going to be like to ride with his grandpa. Gary and Connie graciously understood.

Now the small crowd of “Car Guys” had GROWN.

And another young man (in the Driver’s Seat) asked if he could sit behind the wheel, just once in his life.

Putting on his glasses he (along with everyone else) flashed a HUGE smile at me!

Then a parent came over and got a photo.

Delightful smiles from everyone all around!

These young men just made my day, my week, my month!