We are way too hot and too dry.  I know that other states are in the same scary place in time. Although I know I didn’t want rain during haying season, rain would be a very good thing now. 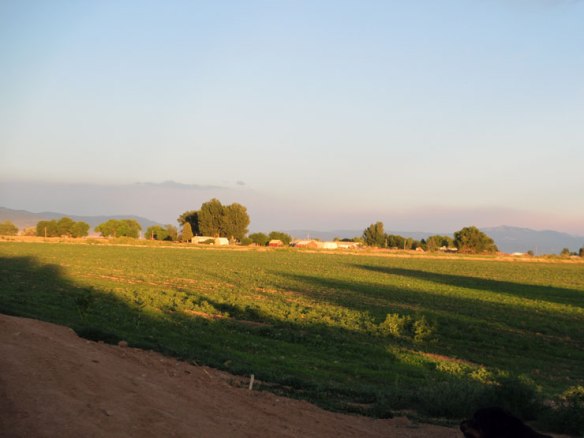 We are checking and changing water on a constant basis.  Terry is doing better, but I still must go with him to set the tubes.  Walking on a slanted ditch bank is just not possible for him at the moment. 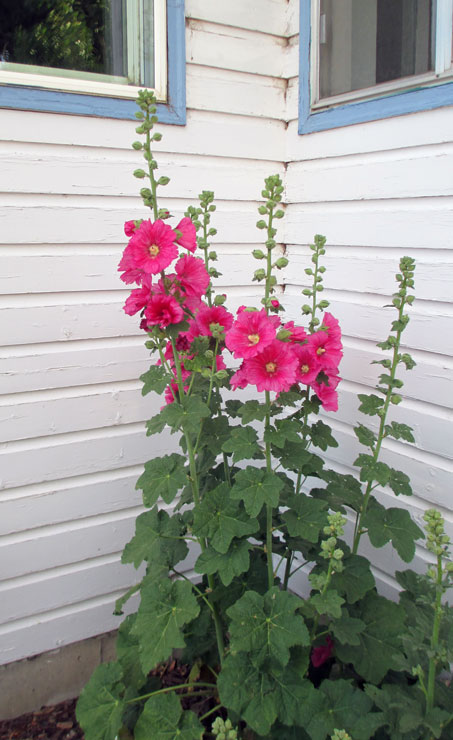 The summer flowers are starting to come into the forefront of the yard now…with the spring blooms fading in the hot dry heat. (YAY! I LOVE SUMMER!)

Lady, that most wonderful mule, has gone to summer camp to work with Shannon’s friends on their huge cow ranch and with their Outfitter mules.  She had gotten very restless and in need of ‘something to do’.  Velvet and Cole just love her.  Cole is even riding her instead of one of his other mules.  Cole only rides mules.   They say she is a very good mule.  I’m so glad Shannon was able to spend the year helping Lady learn that all humans are not mean and cruel.

I miss her sweet mule kisses and when she would talk to me as I brought her apples. Still, I think it is a good thing she has a job to do.  She was VERY fidgety.

Our days are quiet, every day filled with the smell of roses 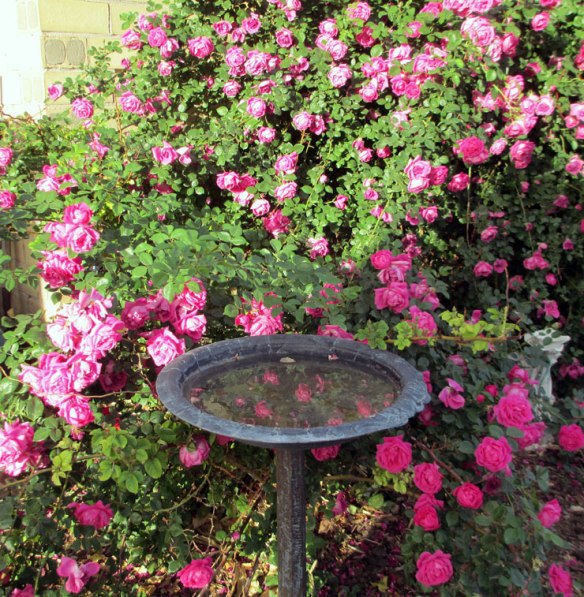 The sun pouring down, tingling upon or skin, glittering on the water, running or still.

As bigger and brighter colors fill my yard sparkling in the light.

We live on the farm Terry’s Grandfather created…Misty and her family live on the other part of our farm which was started by Terry’s Great Grandfather on his Mother’s side.  (We purchased the farm from the estate many, many moons ago.)

The first photo shows the roses that Meta planted way, way, before my time.  Those same roses must be 95 years old now.  They are sweet smelling and every so short lived.  I adore them.

Meta planted them on the side of the Tile House…the house you see behind them.  We call it the Tile House because the whole little house is made from tiles.

When the Tile House was created this farm, the one we live on, was a farm and a Dairy.  It was the only Dairy for the town of Delta.
In the Tile House Meta, and daughters, Benita, and Sally washed up the many, many milk bottles and cream bottles, which were filled with rich, lovely whole milk and delivered early in the morning or late in the evening twice a day.

Also, in the Tile House a milk cooler and a cap and bottler shared space with the cleaning tubs.

Out in the barn, B.J., and sons, Jack (Terry’s Dad), and Kenneth milked, fed the cows. Then hauled the milk into the Tile House.  (Remember this was all done by hand.)

The wagons were loaded and off the boys would go delivering milk to the residents of Delta.  Once in town they would leave the milk and pick up the empty bottles —Benita said some of those bottles were nasty, nasty, nasty…others were washed and cleaned– sometimes with little thank you notes inside.  The cash for the milk products was always attached to a little envelope waiting with the empty bottles.  Benita said, “It was rare that people didn’t pay and Father had to make the trip to town to visit with those who owed.”

Left to right—as I think I know them:  Sally and her husband Bud, the tall son of Sally and Bud in the back, right in front of the tall son is (I think) Meta, then B.J. with his arms around Terry. Next to B.J. is Terry’s Dad, Jack, and another son of Sally and Bud.  Right next to Terry is his best -friend and brother Roger and on the other side is his adored little sister, Carolyn.

The house they are standing in front of is the house we live in today.  It also looks pretty much the same.  🙂

Of the years that I have lived here we have had the special gifts of older people telling us that they remember when Mr. Brown delivered their milk to them, or how Mr. Brown and his sons would willingly give you a free lift to town on the milk wagon so you could get groceries then taking you back home.

Benita  told us that when Father found out about a little family who lost their Dad in a horse and wagon accident and couldn’t afford to have milk…he would drop off a bottle or two as a little surprise.  Never asking for money…just saying: “Oh, I had extra today.  If I didn’t let you have it I would have to pour it out.”

I always think of these little stories when I go into the Tile House, or even just glance at it out of the corner of my eye.  It really is the little acts we perform every day that eventually creates giants.

A farmer’s wife on a farm in Delta, Colorado